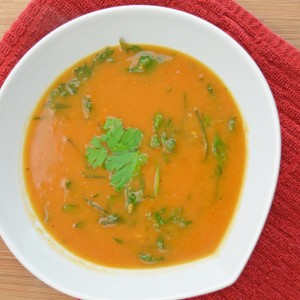 It’s been officially “soup weather” at my house for about a month now, and will be until Spring.  That means that on any given day, you’ll find a “soup of the day” simmering on my stovetop or in a slow cooker. Bean soups are my favorite because they’re satisfying and meal-worthy, so they make an ideal lunch, but I want to make something a little different today so I checked out the soup chapter of More Quick-Fix Vegan — I make the Shortcut Bean Soup from that book all the time and some of the other soups in that chapter have been calling my name recently.

Some favorites are the Hummus Soup with Pita Croutons, the Black Bean-Pumpkin Soup,  and the Guacamole Soup.  I also love the Creamy Tomato Soup, the Lemony Chickpea-Spinach Soup, and the Smoky Corn Chowder, but today my heart belongs to the Chipotle Sweet Potato Bisque.  There’s something wonderful about the flavor combination of sweet potatoes and smoky hot chipotles. This vibrant soup is also very satisfying, thanks to the inclusion of white beans.  I usually garnish it with a little parsley or chives for a nice color contrast, but you could also top it with your favorite cooked green vegetable such as chopped spinach or kale. I’m heading to the kitchen to make some right now.  Here’s the recipe, in case you’d like to make it, too.

Heat the oil or water in a large pot over medium heat.  Add the onion and sweet potatoes.  Cover and cook until softened, 5 minutes.  Stir in the tomatoes, white beans, chipotles, and soy sauce.  Add the broth and season with salt and pepper to taste.  Bring to a boil, then decrease the heat to low and simmer until the vegetables are tender, 15 to 20 minutes.  Use an immersion blender to puree the soup right in the pot or transfer the soup to a blender or food processor and process until smooth, then return to the pot.  Reheat, if needed.  Serve hot sprinkled with the chives.

There’s a great giveaway going on right now on Vegan.com. They’re giving away five of my cookbooks (including More Quick-Fix Vegan and Vegan Without Borders) to one lucky winner.  Enter now!