I’ve come up with a few new recipes for Thanksgiving this year, that I’ll post throughout the week.  For today, though, the subject is cheesecake! On my “Vegan Thanksgiving Hotline” (and in my e-mail in-box) there were some questions about pumpkin cheesecake.  As you know, I’m a fan of pumpkin cheesecake — I’ve been making them every year since the mid 1980s when I used to make them for restaurants.  Over the years the recipe has changed somewhat. In my pre-vegan days I used dairy cream cheese, when I went vegan I began using silken tofu, and then when vegan cream cheese came out, that became the “cheese” in the cake!  I only use the non-hydrogenated vegan cream cheese and I love the convenience of it.  It does contain soy, so if you’re soy-intolerant, you can make a thick cashew cream cheese alternative by pureeing soaked cashews with water in a high-speed blender.

For your convenience, I’m re-posting the recipe for Pumpkin Cheesecake with Cranberry Drizzle (from 1,000 Vegan Recipes).  I’ve also included several variations, including my favorite streusel-like topping, as well as my tips for making great vegan cheesecakes. 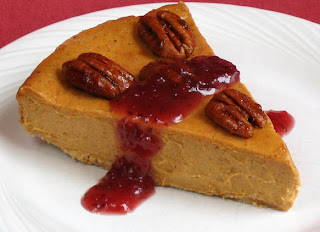 Pumpkin Cheezecake with Cranberry Drizzle
Dense and rich with spiced pumpkin flavor, this dessert is a natural for your Thanksgiving table. The gorgeous orange color offset by the vivid drizzle of cranberry makes a beautiful presentation. I especially like using ground gingersnaps for the crust. From 1,000 Vegan Recipes by Robin Robertson © 2009, John Wiley and Sons.
Crust:
1 1/2 cups vegan ginger snap or graham cracker crumbs
1/4 cup vegan margarine, melted
Filling:
2 (8-ounce) containers non-hydrogenated vegan cream cheese
1 (15-ounce) can solid pack pumpkin
1 cup light brown sugar
1 tablespoon cornstarch
2 teaspoons ground cinnamon
3/4 teaspoon ground allspice
1/2 teaspoon ground nutmeg
Cranberry Drizzle:
1/3 cup cranberry sauce
1 tablespoon pure maple syrup
1 teaspoon melted vegan margarine
1. Make the crust: Preheat the oven to 350ºF.  Grease a 9-inch springform pan. Place the crumbs in the bottom of the pan, add the melted margarine, and mix with a fork to blend. Press the crumb mixture into bottom and sides of pan and set aside.
2. Make the filling: In a food processor, combine the cream cheese and pumpkin and process until blended. Add the sugar, cornstarch, cinnamon, allspice, and nutmeg and process until well blended.
3. Pour the filling into the prepared crust. Bake for 45 minutes. Turn off the oven and leave cheesecake in the oven for another 15 minutes. When done, edges should be golden and starting to pull away from sides of pan, and center should be soft set. Remove the cake from the oven and cool at room temperature for 1 hour. Refrigerate for at least 4 hours before serving or overnight (my preference).
4. Make the topping: In a blender or food processor, combine the cranberry sauce, maple syrup, and margarine and blend until smooth. Pour the mixture into a squeeze bottle or small pitcher and drizzle the over the top of the cheesecake. Keep refrigerated until needed.
5. To serve:  Cut the cheesecake and place each slice on a dessert plate.  Spoon about 1 to 2 tablespoons of the cranberry mixture over the cheesecake slice and onto the plate.  Do not put too much sauce on the cheesecake or it will overpower the pumpkin flavor.

Topping Variations:
Instead of the cranberry drizzle, you can top the cheesecake with any of the following:
* “streusel-type topping” (shown in top photo): Combine some pecans, dried cranberries, and vegan butterscotch chips in the food processor and pulse them until well chopped.  Stir in a little agave, if desired, to make it easier to use.  Spoon the topping on the outer rim of the cheesecake right after it comes out of the oven so it can melt into the cheesecake a bit.
* chopped toasted pecans (or other nuts) sprinkled over the entire top or just around the outer edge
* maple-glazed pecan halves
* vegan whipped cream (can be flavored with rum extract)
* crystallized ginger (that has been ground to a powder) lightly dusted around the outer edge of the cheesecake
* chocolate curls

Cheesecake Variations:
Add 1 teaspoon of rum extract to the batter
Add additional spices for a more deeply “spiced” flavor: a combination of ground cinnamon, ginger, nutmeg, allspice, or cloves are good.
Instead of a gingersnap or graham cracker crumb crust, try crumbs made from shortbread cookies or chocolate cookies.

Cheesecake Tips:
1. Bring cream cheese to room temperature before using.  (Use non-hydrogenated vegan cream cheese.)
2. For best results, make your filling in a food processor or use a stand mixer or electric hand mixer, but don’t use a blender because the mixture is too dense to mix properly.
3. For the crust:  I usually use about 1 1/2 to 2 cups of crumbs for a 9-inch cheesecake.  If you prefer a crisp crust rather than a soft crust, you can prebake the crust for 10 minutes and let cool before adding the filling.
4. When making the crust, add the melted margarine to the crumbs a little at a time — you need just need enough to moisten the crumbs.  Usually 1/4 cup of melted margarine is enough, but it depends on the amount of crumbs you use and also how “dry” they are. For example, when I use ground shortbread cookies (instead of graham cracker crumbs) I find that there’s more moisture in the cookies, so I need to use less margarine.  Sometimes the crumbs are very dry and I need a little extra margarine.
5. Always grease your springform pan (either with margarine or nonstick cooking spray).  Make sure your springform pan is properly closed before using. Place the pan on a baking sheet in the oven to bake.
6. For pumpkin cheesecake, I like to use light brown sugar (which packs tightly into cup).  If you’re using a different sugar, you may want to add extra to make it sweet enough.
7. Before scraping the batter into the crust, taste it — you can add a little more spices or sugar if desired.
8. I usually bake cheesecakes for 45 minutes and then leave them in the oven for a few extra minutes to gently continue cooking.  A few tiny cracks may appear around the edge.  If it overbakes, you may get more cracks.
9. Cool the cheesecake at room temperature for at least an hour, then refrigerate for at least 4 hours.  I prefer to bake it the night before to allow for more chilling time.