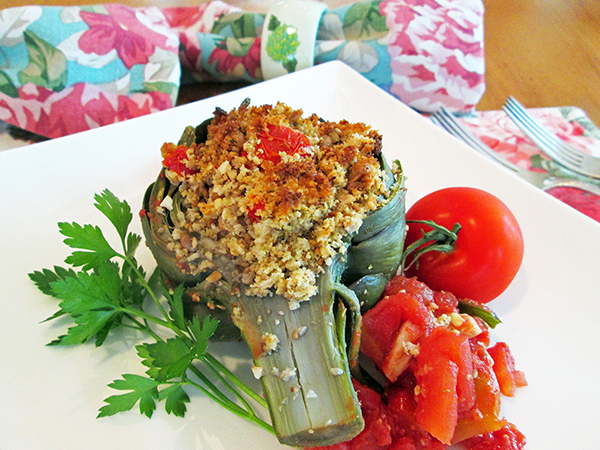 Delicious vegan meals are fun to prepare in your own home kitchen with Laura Theodore’s highly anticipated new cookbook, Jazzy Vegetarian’s Deliciously Vegan: Plant-Powered Recipes for the Modern, Mindful Kitchen. This modern guide to vegan eating is a 320-page cookbook featuring Laura’s recipes (many from her award-winning PBS television show) and includes beautiful full-color photos on nearly every page. 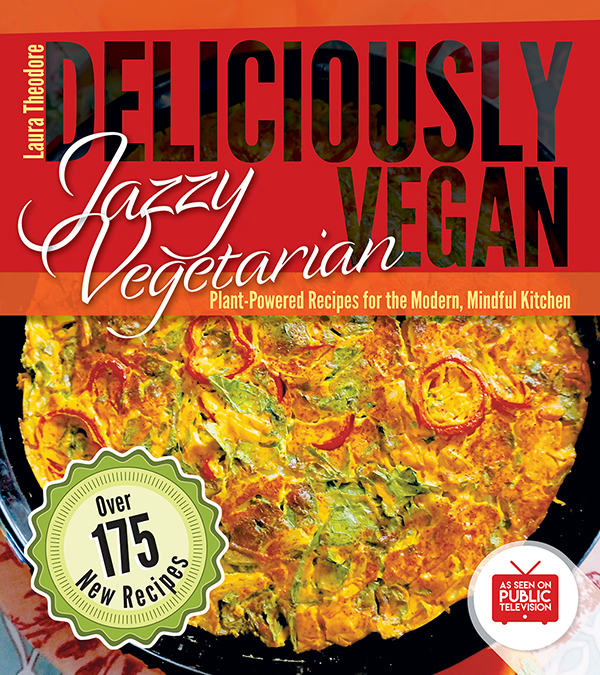 In addition to over 175 flavor-packed, plant-based recipes, Laura helps readers learn what it takes to stock and cook on a daily basis in a well-equipped vegan kitchen, with these essential Top Ten lists:

Highlighting holiday entertaining to everyday ideas for preparing quick and delectable plant-based meals for the family, Laura Theodore’s  is the ultimate guide for the vegan home chef.

Would you like to own a copy of Jazzy Vegetarian’s Deliciously Vegan?  Just leave a comment at the end of this post telling me your favorite easy vegan meal and you’ll be entered in the giveaway. The giveaway ends on Monday, March 5th at midnight.  The winner will be announced on Tuesday, March 6th. 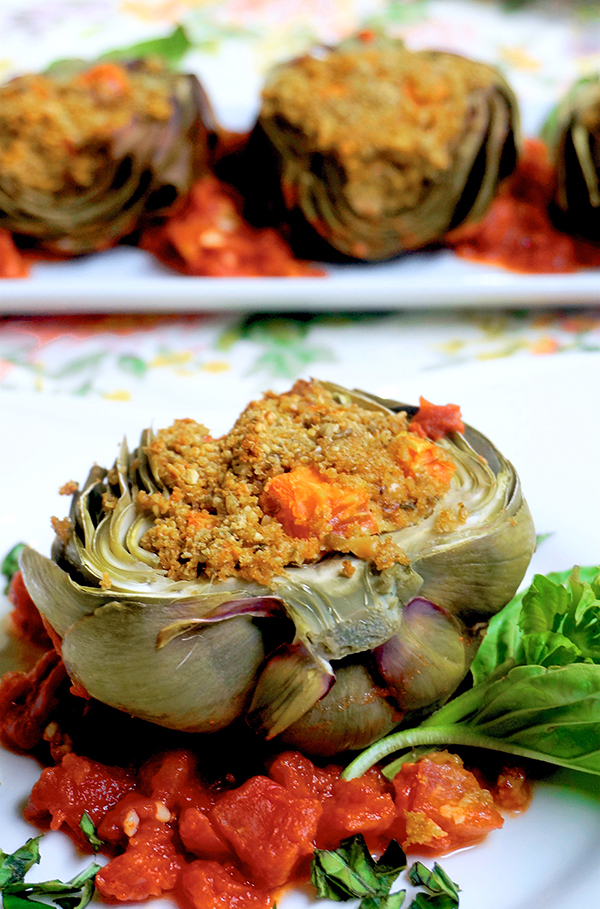 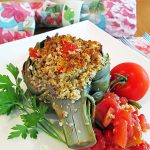 I adore artichokes. I have loved ‘em since I was a little girl and whenever I see beautiful varieties in my marketplace, I cannot resist them. This recipe is festive and filling with cashews and sunflower seeds showcased in a flavorful stuffing. I like to serve this colorful dish as a first course, or they do double duty as a luncheon entrée.
Course Appetizer
Cuisine Italian
Yields 8 servings
Author Laura Theodore

Chef's notes:
To trim and clean the artichokes, start by cutting off the top 1/2 to 1 inch of each artichoke to remove the spiky tips. Cut off any remaining spiky tips with kitchen shears. Trim away the tough edges of the stem. Rinse each artichoke under cold running water, spreading the leaves to rinse out any residual dirt or sand.

To cook the artichokes, put 3 to 4 inches of water in a deep saucepan large enough to hold all the artichokes snugly so they remain upright as they cook. Stir in the balsamic vinegar, if using. Add the artichokes, making certain they are standing partially upright. Cover and bring to a boil. Cook the artichokes until crisp tender, about 20 minutes. They are done when an outer leaf peels off easily. Remove the artichokes from the pan using tongs and arrange them upside down on a rack set over a large dinner plate to drain and cool.

Once the artichokes are cooked and cooled, you can remove the “choke.” Begin by cutting each artichoke in half, vertically. Scoop out the fuzzy center choke with a grapefruit spoon or teaspoon. If you are cooking the artichokes ahead of time, wrap the artichokes tightly in plastic wrap and refrigerate for up to 1 day before preparing this recipe.

If you are serving this as a luncheon entrée, serve 2 artichoke halves per person.