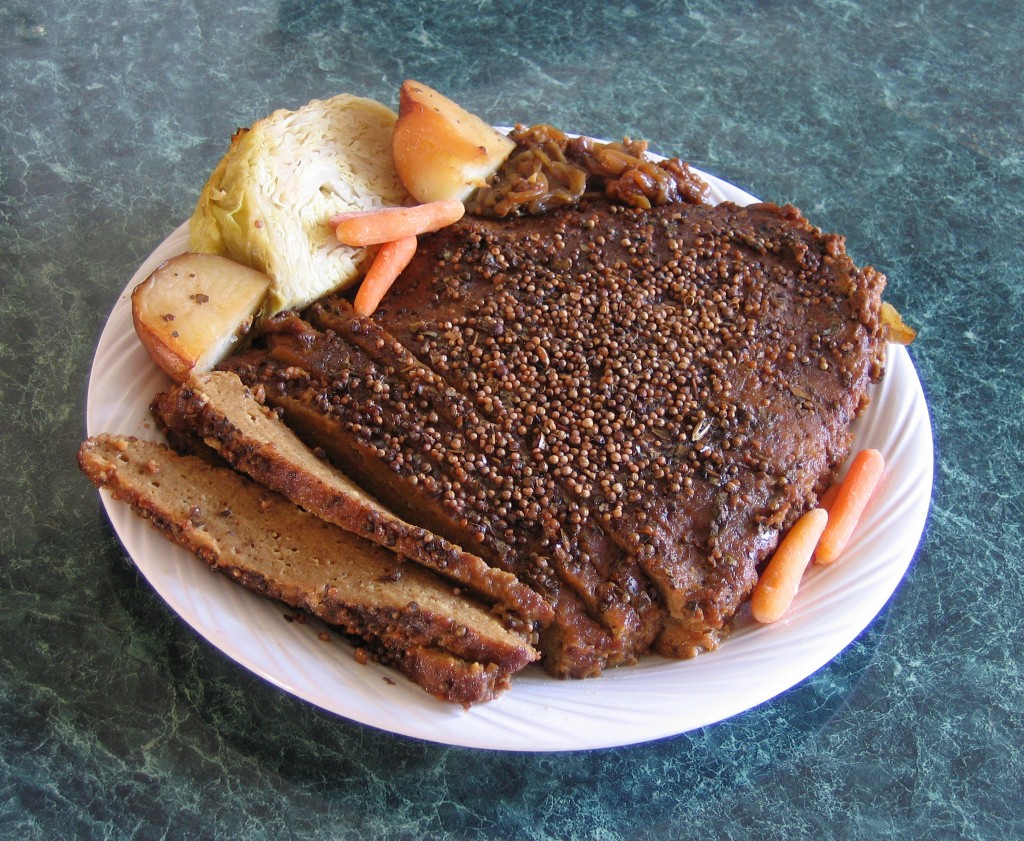 This St. Patrick’s Day consider making the Corned Seitan and Cabbage from Vegan on the Cheap.  Not only is it a delicious way to celebrate the holiday, but the leftovers will reward you with the makings of the most amazing Reuben sandwiches this side of a New York deli.
If you don’t already have Vegan on the Cheap, I do hope you’ll get it soon because the recipes in that book can save you some serious $$$ (and give you great meals in the bargain!) In the meantime, though, I’ll share the recipe for Corned Seitan and Cabbage so you can celebrate this St. Patrick’s Day in style.

If you prefer some lighter fare to mark the day, try my Colcannon Quesadillas. You can find the recipe on OneGreenPlanet.  Mashed potatoes + spinach (or kale) + tortillas = an easy and delicious treat that can be enjoyed as is or served with picante sauce or a spicy mint chutney (for an Irish-Mexican-Indian fusion feast).

Now here’s that seitan recipe….Happy St. Patrick’s Day!
Corned Seitan and Cabbage
Look for pickling spices in the spice aisle in your supermarket. From Vegan on the Cheap by Robin Robertson © 2010.
Tip: For extra flavor, try replacing 1 to 2 tablespoons of the water in the seitan mixture with 1 to 2 tablespoons of pickle juice (from a jar of dill pickles).
1 sweet yellow onion, coarsely chopped
2 garlic cloves, crushed
1 large carrot, cut into 1/4-inch slices or 1 cup baby carrots, halved lengthwise
1 small head cabbage, sliced, reserving 2 large leaves
Salt and freshly ground black pepper
2 cups vital wheat gluten
1 teaspoon onion powder
1 teaspoon ground coriander
1/2 teaspoon ground allspice
1 1/2 cup water, or more as needed
3 tablespoons soy sauce
3 tablespoons plus 1 teaspoon coarse brown mustard
1 teaspoon apple cider vinegar
3 tablespoons light brown sugar
2 teaspoons pickling spices
1 pound Yukon Gold or small red potatoes, halved or cut into chunks if large
1 cup vegetable broth
1.  Lightly oil the insert of a large oval slow cooker or spray it with cooking spray. Arrange the onion, garlic, carrots, and sliced cabbage in the bottom of the slow cooker. Season with salt and pepper, to taste.
2. In a large bowl, combine the vital wheat gluten, onion powder, coriander, allspice, 1/2 teaspoon of salt, and 1/4 teaspoon of pepper. Add the water, soy sauce, 1 teaspoon of the mustard, and vinegar. Mix well, adding a little more water if the mixture is too dry, then knead for 2 minutes until smooth. Shape the seitan to fit inside your cooker.
3.  In a small bowl, combine the remaining 3 tablespoons mustard and the sugar until well blended, then spread evenly on top of the seitan.  Sprinkle the pickling spices on top, pressing them with your hand to imbed them in the mustard mixture.
4. Carefully place the seitan in the cooker on top of the two reserved cabbage leaves. Arrange the potatoes around the seitan.  Pour the broth over the potatoes and season them with salt and pepper.   Put the lid on the slow cooker and cook on Low until the seitan and vegetables are cooked, 7 to 8 hours.
5. To serve, remove the vegetables and seitan from the slow cooker.  Cut the seitan into slices and arrange them on a serving platter.  Surround with the vegetables and spoon the cooking liquid over all. Serve hot.
Note: This is best when made in a larger cooker to accommodate vegetables, but if you have a smaller 4-quart slow cooker, you can still make this recipe—just use half the amount of vegetables so you do not overfill the cooker.  Alternatively, you can cook the potatoes and cabbage in the oven or on top of the stove and just use the slow cooker to cook the seitan on top of the onion and cabbage leaves (these give added flavor to the seitan and help hold its share), adding the vegetable broth and garlic.
Check out my other posts at Robin’s Vegan Planet blog