For Fridays during Vegan MoFo I’m writing about recipes from some of my very early posts that are of particular interest.  This week it’s my recipe for Slow-Cooker Seitan Pot Roast.  Why?  Well, for one thing it’s the MOST visited post on my entire blog, secondly, it’s slow cooker season, and third, if you’ve missed out on this before, then you’ve really been missing something.  (Unless of course, you don’t like seitan, then you probably don’t care. Although you could certainly make pot roast style vegetables and add some tempeh or beans, right? Or maybe you’d like the recipe for this Pot au Feu.  The recipe calls for seitan, but you can use sauteed tempeh or cannellini beans instead: 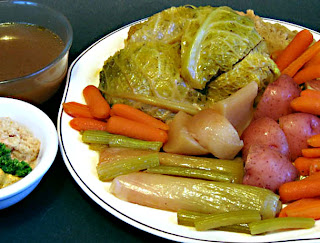 My original pot roast recipe (top photo) appeared in my slow cooker book, Fresh from the Vegetarian Slow Cooker. Since that time, I’ve done several adaptations, including Vegan on the Cheap where you’ll find a regular seitan pot roast recipe as well as a personal favorite, Corned Seitan and Cabbage.  (The corned seitan is ideal for vegan Reubens)  Here’s a photo: 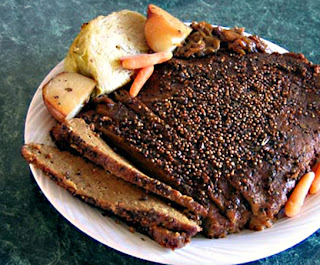 I also like to occasionally change things up, pot-roast wise, and cut the seitan into smaller chunks before adding to the slow cooker.  I think that may give it a bit more flavor from being more exposed to the broth and veggies.  For more of a “stew” effect, you can even cut the seitan into bite-sized pieces.
Regarding slow-cooker cooking times, I can’t stress enough how much time variance there is among the different slow cooker models. The best advice is to get to know your own slow cooker and adjust accordingly. You may have to “lift the lid” a couple times to test for doneness until you are familiar with your cooker and how long it takes for things to be done.
CONTESTS! CONTESTS!

There’s still time to enter to win a copy of Vegan Unplugged here. (The contest closes Monday at midnight and the winner will be announced on Tuesday.)

And at Vegan Appetite, Tami is giving away a copy of my book, Party Vegan.  Check it out!  Tami also posted some great recipe photos and review of the book.

And so ends the second week of Vegan MoFo!