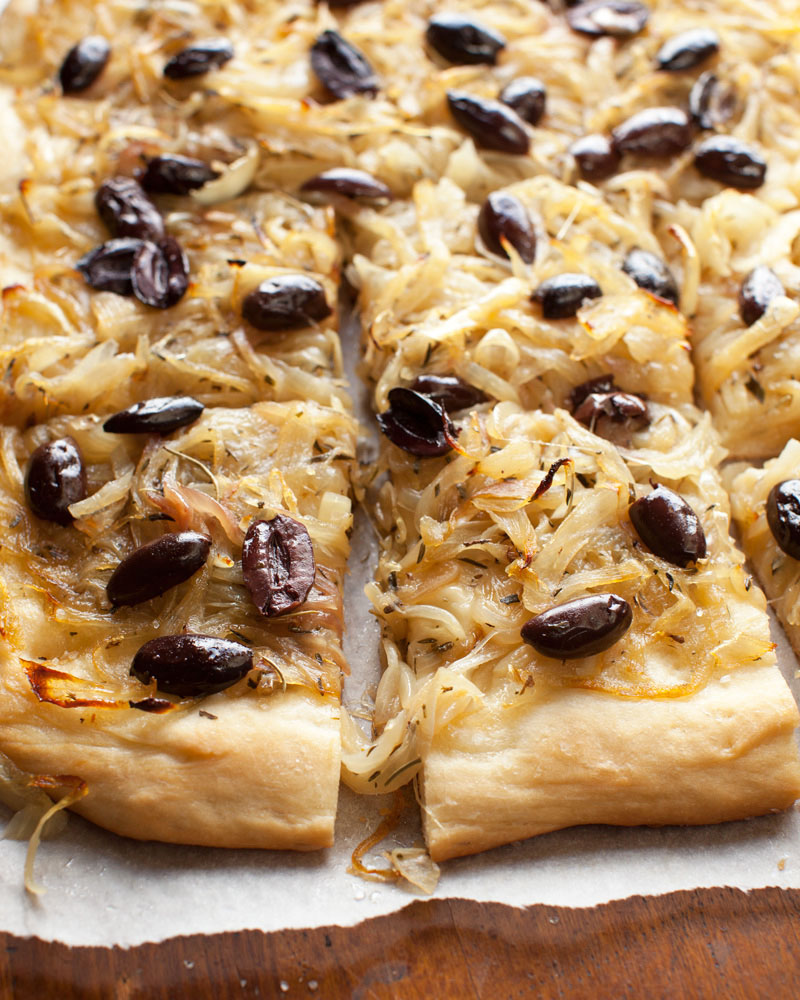 In keeping with our minimalist theme of this year’s holiday season, I’m taking a break from my usual New Year’s Eve parade of appetizers.  This year I’m only making one dish: a pissaladiere – and a shortcut version at that!
This savory caramelized onion tart hails from Nice in the Provençe region of France. Known for its thick dough and flavorful topping of caramelized onion and luscious Caillette or Niçoise olives, this sophisticated pizza can be enjoyed as an appetizer or main dish.
I’m going to make an adapted version of the pissaladiere recipe from Vegan Without Borders, using a ready-made pizza dough for the crust, instead of making one from scratch.  (I like the dough sold at Trader Joe’s and keep some in my freezer for occasions such as this!)
Here’s my adapted recipe, in case you want to try it for yourself!

Thanks to everyone for making this a great year.  I wish you all a Happy New Year!  See you in 2015!

Short-Cut Pissaladiere
Adapted from Vegan Without Borders by Robin Robertson © 2014.

Heat the oil in a large skillet over medium heat.  Add the onions, salt, and pepper. Cook, stirring frequently, until the onion softens and turns golden brown, about 10 minutes. Reduce the heat to medium-low and stir in the herbes de Provence.  Cover and cook 20 minutes longer, or until the onions are soft and caramelized.  Taste and adjust the seasonings, if needed.  Set aside to cool.  Preheat the oven to 425°F. Lightly oil a rectangular baking pan and set aside.
Stretch the dough to fit the baking pan and arrange it on the prepared pan. Spread the onion mixture evenly onto the dough, leaving a 1/2-inch border of exposed dough around the edge. Arrange the olives on top of the onions, spacing them evenly.  Bake for about 16 to 20 minutes, or until the crust is nicely browned.   Cut into rectangular pieces (small or large, depending on how you are serving it) and serve.

Next post: The Vegetarian Flavor Bible & How to Get More Umami Flavor From Plant-Based Ingredients