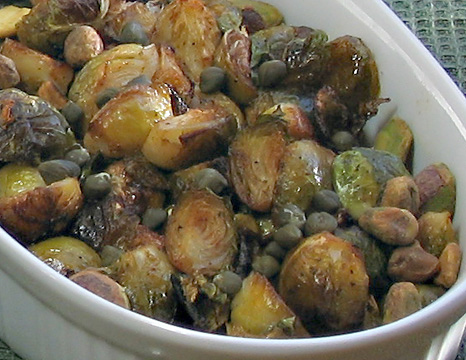 So many people have asked me for the recipe for the Roasted Brussels Sprouts with Pistachios and Capers that I made last Thanksgiving.  Well, it took me nearly a year, but I finally wrote it down.

I’ve also made this with walnuts instead of pistachios and dried cranberries instead of capers.  I love it either way!

1 1/2 pounds Brussels sprouts, trimmed and halved or quartered (depending on the size)

Preheat the oven to 425° F.  In a bowl, combine the Brussels sprouts with 3 tablespoons of the oil and season with salt and pepper to taste . Spread the Brussels sprouts in a single layer on a large rimmed baking sheet  (lined with parchment paper, if desired). Roast for 25 to 30 minutes, stirring once or twice, or until tender and slightly caramelized.

About 4 minutes before the Brussels sprouts are done roasting, sprinkle them with the pistachios.

In a small bowl,  blend the lemon juice and agave with the remaining 1 tablespoon of oil and salt and pepper to taste. Stir in the capers.

Transfer the hot Brussels sprouts and pistachios to a serving bowl, pour on the caper mixture and toss to combine. Serve immediately.