Proteinaholic – Q&A with the Authors + Giveaway 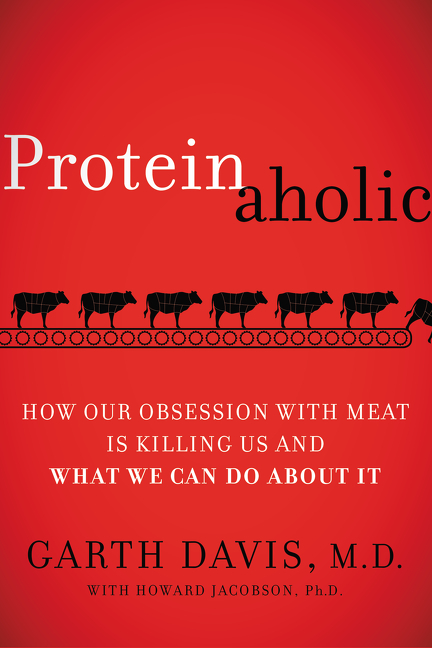 Now for something completely different…. a giveaway and guest post from Garth Davis, MD, and Howard Jacobson, PhD, the authors of the fascinating and well researched new book: Proteinaholic: How Our Obsession with Meat is Killing Us and What To Do About It.   After you read the informative Q&A, leave a comment to be entered to win your own copy of Proteinaholic!

Q: If you decide to become a vegetarian or vegan, do you need to combine grains and beans at every meal to make sure you get enough protein?
A: Protein is so abundant, it’s impossible to be protein deficient if you’re getting enough calories. Our requirements are quite low, since we’re very efficient at using and recycling amino acids. The only way you could be protein deficient is to survive on sugar. Even enriched, bleached white wheat flour contains 11% protein!

Q: Isn’t protein the most important nutrient? Shouldn’t we err on the side of getting too much rather than not enough?
A: The real danger in our society is excess protein, which occurs commonly in those eating animal products on a regular basis. Animal protein toxicity contributes to obesity, diabetes, high blood pressure, cardiovascular disease, and cancer, just to name a few common chronic conditions.
The “protein scare” is a marketing tactic with no basis in science. If you’re worried about whether you’re getting enough protein, take 15 seconds and check out the Proteinaholic protein requirements calculator, which is based on research done by the US government and the World Health Organization.
Q: Why do doctors, personal trainers, and bloggers all tell me to eat lots of protein? If they all agree, how can they be wrong?
A: Doctors learn almost nothing about nutrition in medical school. Your doctor probably knows less about nutrition than you do.
The modern history of protein intake recommendations has been one of continual inflation. The US Recommended Daily Allowance (RDA) takes the average protein requirement and adds enough extra to cover over 97% of the population, so there’s a 47% that if you follow the RDA, you’re getting too much protein. Add to that the fact that most medical and fitness professionals disregard the science-based RDA in favor of unvalidated calculations that are much higher. Then they overadjust for activity, incorrectly assuming that getting exercise hugely ramps up your protein requirements. Turns out it doesn’t. Bodybuilders need only 5% more protein than sedentary folks. Endurance athletes need 67% more, but since most Americans eat double or triple the RDA, we’re all eating far more protein than even the most dedicated ultramarathoner requires.
Finally, they misuse the formula, mistakenly basing their calculations on weight rather than lean muscle mass. Think about it: if you weigh 150 pounds, you need a certain amount of protein. If you gain 150 pounds of fat, you now weigh 300 pounds, but you don’t need more protein. That’s why science-based protein calculators (like the one at Proteinaholic.com/calculator) use lean body mass (all your weight minus your fat) to figure out how much protein you need.
Q: If animal protein leads to weight gain, how come people lose weight on low carb diets like Atkins or Paleo?
A: The rapid initial weight loss from a low carb diet is mostly water loss. When we deprive our body of its preferred fuel, carbohydrates, it grabs the next best thing: glycogen from the liver. This glycogen is stored in water, so when we burn it, we dispose of the water as well. Once we use up this reserve tank, the weight loss slows depending on calories in and calories out – in other words, fundamental thermodynamics. And people tend to eat less on low carb diets because of the lack of variety, and the nausea that accompanies the consumption of that much animal protein. Also, in my bariatric medicine clinic, pretty much 100% of my patients coming in for last-resort weight loss surgery have tried Atkins or another low-carb variation, often multiple times.  They all say the diet worked, in that they lost weight at first, but they were just too weak and undisciplined to stick with it. The truth is, you can’t stick with an Atkins diet long term any more than you could handle a low-oxygen diet. After a while, you would be gasping for air no matter how much willpower you brought to bear. And when you deprive your body of the fuel it needs, it will eventually hijack your brain to convince you to eat those “evil carbs.” Adherence failure is built into low carb diets. It’s not you.
Q: If I want to lose weight, shouldn’t I be avoiding foods like potatoes, rice, corn, and fruit?
A: Whole grains, starches, and fresh fruit are actually the dieter’s best friends. These foods provide the bulk of calories in every lean population ever studied. The only societies with obesity problems are those that add large amounts of animal products and highly processed and artificial foods to their diets. According to the National Weight Control Registry, which has tracked over 10,000 people who have lost a lot of weight and kept it off for years, the diet most closely correlated with success is a “low-energy, low-fat diet.”  And in multiple studies, vegans weigh less than ovo-lacto-vegetarians, who weigh less than those who include fish. Meat eaters are the heaviest. In fact, a plant powered diet rich in starches and fruit proves more effective than extremely calorically restrictive diets, which backfire by telling our bodies to slow down our metabolism in response to a famine situation.  So ignore what your paleo friends have been parroting. Eat from earth’s bounty, not too much, and get active. The pounds will start falling off.

GIVEAWAY: Leave a comment below to win a copy of Proteinaholic.  The Giveaway closes on Sunday 10/25 at midnight.  A winner will be announced on Monday, 10/26.